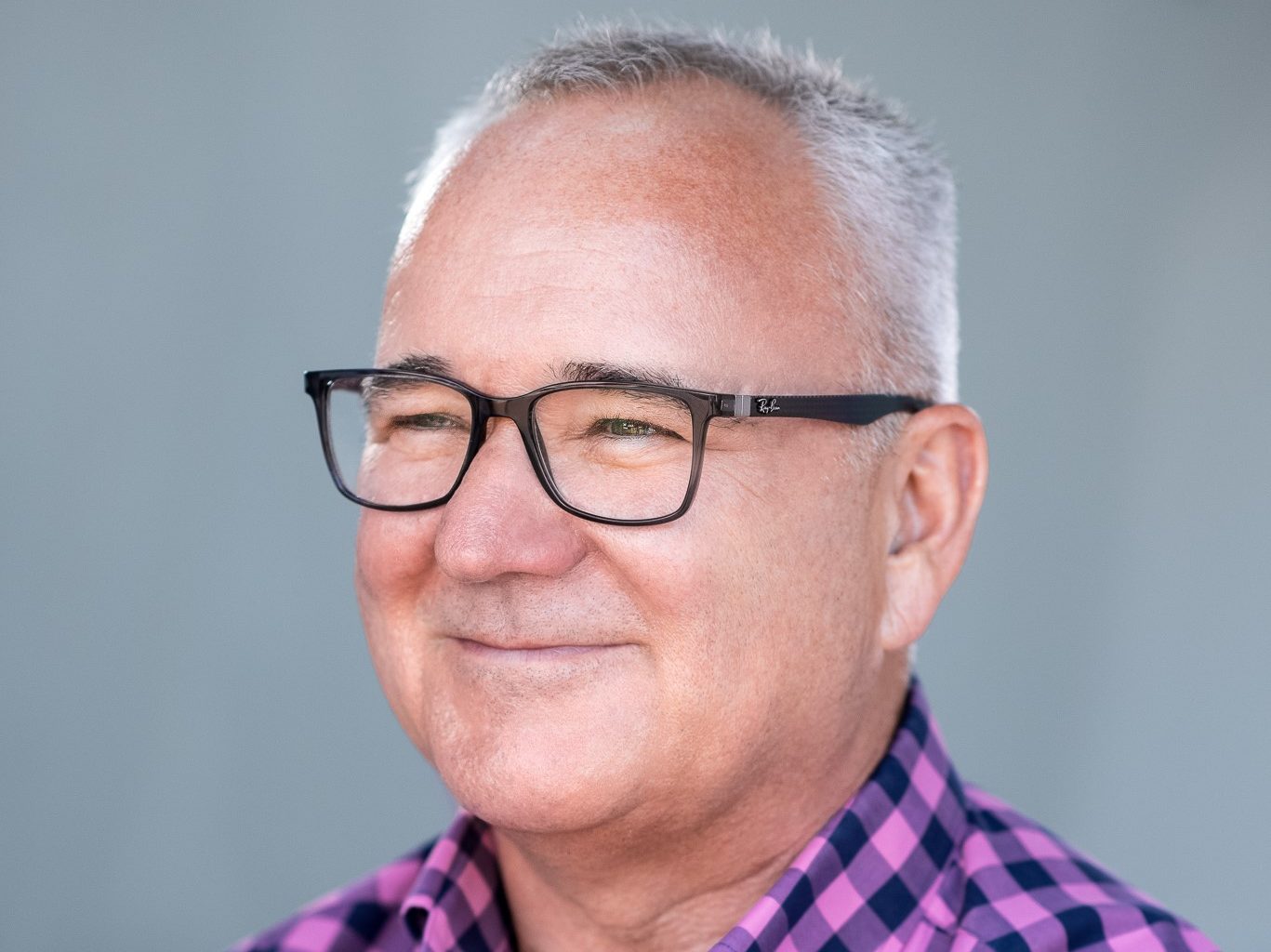 I’ve been with Minerva for three years, and just before that, I’d worked on the Business Ready programme.

It depends on how far back we want to go!

I originally studied chemistry at Liverpool University. When I left, I joined a company called Cormix – which was involved in construction chemicals as a technician with a view to taking over their export desk.  It was a Unilever company that grew out of a novel use for a detergent waste stream.

That was in 1983 – I’d been in the job nine months, working in London as part of my training, which included being on construction sites including the M25, the Lloyds Building and the extension of Heathrow, when they decided to expatriate me to Indonesia at the ripe old age of 22!

Despite technically being part of Unilever Indonesia, I was seconded to a local agent to help build the business and service a major dam project being built by Balfour Beatty. Unfortunately, the local agent was a bit of a shambles, and I was left to take over.

The product didn’t work in that market because of the nature of the sand and cement, so we had to reformulate all of the products. It was a very challenging market on lots of levels.

At 22, it was my first experience with big business, and dealing with the complexity of local corruption which bled into many aspects of life due to the poverty. It was a tremendous melting pot and a country of phenomenal opportunity.

The agent went bust; they were bought out by a local investor, who created all sorts of problems. Indonesia could be a dangerous place at that time. I experienced violence; there were multiple attempts on my life and robberies – all sorts!

We moved away from the investor and appointed Indo Cement which was part of a much larger Indonesian group. Together with our reformulation, my experience and knowledge of the market dynamics, plus the construction of a local manufacturing facility, we went on to dominate the market as I left.

A claim to fame is when you land at Indonesia’s International airport and drive into the city, the majority of concrete your see and touch has Cormix in it.

I left at 27, returning to the UK with another Unilever chemical company called Crosfield. My new role was in business development. Crosfield made silicas and silicates for industrial to fine chemical applications.

Their products cover all aspects of our life, from paints to detergents, toothpaste, beer, pharmaceuticals, high-performance catalysts, paper etc. A great building block for the job I do now. On my return, I also vowed never to have the “wool” pulled over my eyes by an accountant again, so I went out and got an MBA from Warwick University

We were looking to invest in South East Asia with a new product to support Unilever’s drive-in zero phosphate detergents, so I worked very much with Unilever’s detergent arm.

I then moved into a sales role looking after the major markets in Europe for Crosfield.  After two years came the next “knock on the door” for another expatriate tour.  Unilever was very much about wanting their managers to have international experience.

In 1993, I was offered the job of Commercial Director for Latin and Central America for Crosfield but based in Gessy Lever (Unilever) Brazil.  This was another rollercoaster of an experience. Nobody told me it was a failing business; inflation was 45% per month, and I was expected to turn it around!

However, I managed it in the end with the introduction of new products and bringing a destructive price war to an end.  I also started a family, and two of my three daughters were born there.

A few years later, I returned to the UK in a business development role at Crosfield and basically had a desk and a phone!

At that stage, I was looking at other opportunities for products within our portfolio, which led to a series of patents – some in paper, paints, and then the discovery of a treatment for a condition called hyperphosphatemia, a disease that renal patients suffer, which culminates in death.

This technology once again grew out of my detergent experience gained through Crosfield and the migration of a product across.

Unilever sold their chemical companies to ICI, so I remained in the business development role and sought opportunities for products we had.

In 2000, we were bought by Jim Ratcliffe (INEOS founder), and he saw the drug we’d developed as an opportunity. He said: ‘go and find a partner, and I will support you’. So, I found an external company that invested with us, and we started developing it.

After a couple of years, we saw the merit in the drug, and INEOS was keen to support it. However, we did go through a hiatus as our then partner fell into financial problems, culminating in a heated legal dispute.  At this point, I decided I need a law degree, so I went out and got one.

In 2005 I formed INEOS Healthcare with Jim’s support, which started with me and two lab technicians. I grew it into a core workforce of 25, but we had a total workforce, including third parties, of around 1,000.  I was also flattered to be awarded the Potts Medal by the University of Liverpool for my contribution to science later.

We were in 23 countries and 250 hospitals. We took the product from the lab through the manufacturing process, the toxicological work and the clinical trial and marketing strategy.

It led to a whole series of papers and patents. By that time, I was the holder of ten patents and published in some prestigious medical journals.  It was a great experience, but then along came the crash of 2008, and we were one of the victims, having spent around £72m but remained cash negative.

My next career step was to run the local Air Ambulance as the operational director. I launched the national children’s Air Ambulance, which was a novel way of taking a child from intensive care bed via ambulance and then via helicopter into one of the specialist children’s hospitals which had never been done before.

It involved building a specialist stretcher, fitting out a helicopter with specialist equipment, training medical staff in helicopter safety, mapping potential landing sites across the UK from which to receive children and babies, and raising the necessary funds to support it.

That was followed by an interim role in Public Health Wales to help them restructure as a change agent.

I then did some consulting work with small and medium enterprises – and some legal work too. I experimented with the launch of a nutraceutical business and also helped SMEs with debt recovery issues and legal disputes. At this stage, I had added a Masters to my original law degree.

I joined the University of Warwick Science Park in 2016 on the Business Ready team before stepping into the Head of Minerva role in 2018. In 2020, I was awarded Barclays Entrepreneurship Regional Icon award for my contribution to the development of the Midlands risk capital economy.

So, it’s been a varied career up to now!

Firstly, I must ensure that the companies that apply for Minerva’s angel investment are attractive to our investor base and investment-ready.  Those selected for further valuation are then interviewed. We pride ourselves on the quality we deliver.

We have a socio-economic responsibility too, so I have to be meshed into the local economic ecosystem in terms of early financing, including helping to grow the private risk capital market.

This involves sitting on panels, working with the West Midlands Combined Authority on new initiatives relevant to supporting the growth of our domestic companies and investor base. The same skills are also being applied to help Liverpool too, where we have a network.

The third element is the contribution to the University, and we provide mentors and panellists in support of spinouts plus lecturing to both students and MBAs on aspects of entrepreneurship. We all want to work to deliver the University’s contribution towards innovation and growth.

We have now supported well in excess of 100 companies raise over £16m, which has been used to leverage a further £48m. We remained active throughout Covid, and in the first 12 months, we facilitated more than £2m of investment. We also ran an investor educational series which attracted over 650 attendees.

One great thing I have achieved is building our investment groups across the Midlands and into Merseyside through our University friends. As a result, we have the largest number of investment groups in the UK.

We have several research projects underway with Warwick Business School to better understand the impact of equity investments, and it is also great to share what I have learned with the new generation of entrepreneurs through the lecture series we run together.

Which companies are some of Minerva’s biggest success stories?

Our greatest success during Covid was a company facing administration. We identified an investor who was willing to support them. They became the CEO and went on to raise £750,000 to keep them going.

Investors don’t come into this to make money, believe it or not. They hope to get something out of it, but in many ways, it is philanthropic – they are supporting a new generation of companies.  There is a general misconception about angels as well.  They have been successful in business, want to give something back and typically invest in packets of £10,000, up to half of which can be offset by tax in some instances.

We’ve had instances where investors could have taken an exit but have chosen to continue to support the company, which indicates the level of commitment.

Most want to give something back, engage with businesses and pass on some of their knowledge and expertise.

I recently moved to Balsall Common. I moved to this area in 2011.

I do hot yoga. I used to be a spinning teacher, which I did until relatively recently, but I’m getting too old for that now!

Hot yoga is yoga in 42-degree heat! You sweat buckets, and it becomes a strength and cardio workout because you are trying to cope with the heat.  I do keep the cardio and in lockdown bought a rowing machine and Maces for training.

I guess I am a person of extremes. I can’t go on holiday and just sit on the beach. I have to be active.

I used to ski a lot before wear and tear injuries stopped me from doing it. I am also learning to play the cello!