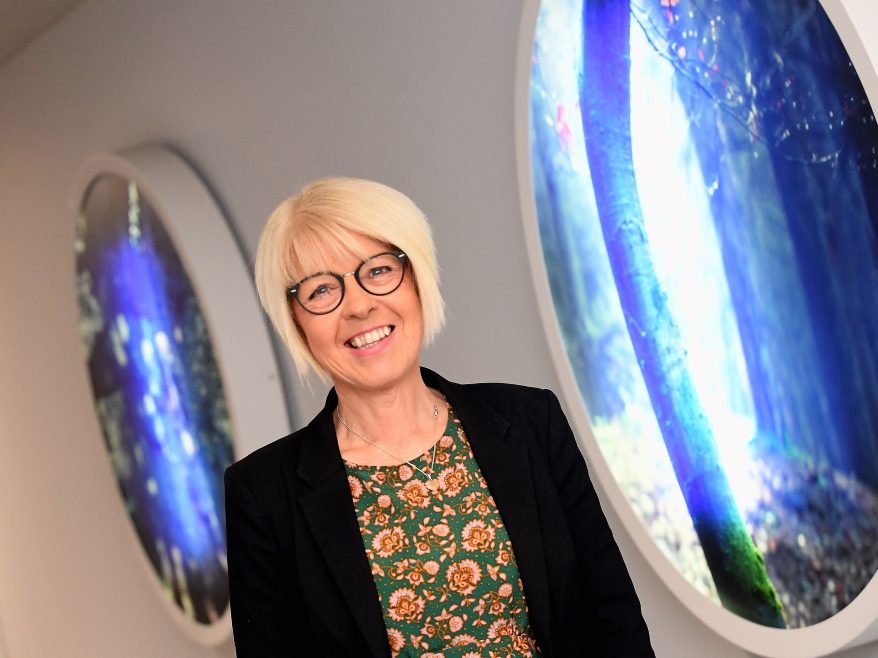 I have been here since June 1989, so over 30 years! I started at the Science Park as a receptionist and took on more and more responsibilities over the years.

I have been in my current role as Facilities and Compliance Officer for close to five years, and I passed my NEBOSH Health and Safety qualification in April 2019.

This was the same year I was presented with a Long Service Award by Stuart Croft, the Vice Chancellor of the University of Warwick, which was lovely to receive.

What did you do prior to starting your current role?

I worked for Coventry City Council as a receptionist for several years before I saw a vacancy for a receptionist at the Science Park. It was more hours than I was on already so I applied straight away.

Initially I would help the companies based at the park with a range of administrative tasks and issues like any receptionist would, but the way the job was done then is unrecognisable compared to today.

Before computers and internet were widespread, there were no emails – everything had to be written down as a memo and circulated to various companies to begin with.

We also used a huge Telex machine along with a fax machine to send messages to people as well, which isn’t something the younger generation would be familiar with! But that was just the way it was done back then.

I later became PA to the Finance Manager, over the years my role focused more on facilities and health and safety and the opportunity came up for me to become a Facilities and Compliance Officer.

Ultimately though, no matter what my official job title has been, I’m known as the person at the Science Park who knows the answers! When anyone has a problem they need sorting, or a question on how to solve an office issue, they often say: ‘Linda will know’.

I always try and help, whether by finding the solution directly or pointing people in the right direction.

Sum up your day-to-day responsibilities

As Facilities and Compliance Manager, I’m responsible for making sure our ten buildings on the Science Park are adhering to health and safety requirements, and dealing with any issues that might arise.

You’d be amazed at what needs to be tracked and assessed to ensure we are compliant. – fire extinguishers, panels and alarms need to be regularly checked. There’s a very long list, and I need to make sure I’m on top of it so the Science Park can run smoothly.

It’s not always easy to do that – my job often feels like I’m juggling lots of balls – but I have a great team working for me who help keep the Science Park operating as it should.

In addition, I have to quickly jump on any issue that develops within any of our buildings, whether that’s broken air-conditioning, faulty lights, and even blocked toilets, which is not my favourite part of my job!

Joking aside, it’s important we act swiftly to resolve any problems as we want to keep our companies happy and running their businesses as efficiently as possible.

This kind of job can sometimes be taken for granted by others, but it’s vital it’s done correctly as businesses only tend to notice how important the role is when things go wrong.

What’s great is that because I’ve been in at the Science Park for such a long time, I’ve got to know the contractors well and it means I can call them directly to fix problems rather than going through the companies they work for. It saves quite a bit of time which is so important when a company has a problem that needs sorting.

Any interesting stories during your time at the Science Park?

As a receptionist you meet all sorts of people visiting the Science Park, but when I started I was quite shy.

One day a rather moody looking man walked into the building saying he was here to meet someone, so I asked for his name but I couldn’t quite make out what he said. I was too shy to ask him to repeat himself. He also wrote it down in the visitors book but I couldn’t read his handwriting either.

I phoned the company to say he had arrived, and, not thinking of anything else his name could be, said: “I’ve got a Dr Frankenstein in reception for you.”

He immediately turned to me and shouted: “Finklestein, Dr Finklestein!” Needless to say I was very apologetic!

Luckily, I was able to overcome my shyness which made me much better at my job and meant I avoided embarrassing situations like that.

I’ve seen plenty of companies come and go during my time – many came here as fledgling companies and later moved onto bigger and better things as they grew.

What do you enjoy most about working at the Science Park?

This sounds clichéd, but we’re like a family here. I’m very much a people person, and I love meeting new companies and staff, as well as talking to ones I’ve known for years.

I found lockdown especially difficult, as I much preferred dealing with people face-to-face and being on site with everyone rather than being forced to use video conferencing. That said, I was able to speak to people often while working from home, and I got to spend a bit more time with my dog, so it wasn’t all bad.

I’m now back in two days a week and I very much enjoy the balance of home working and office working.

I love to know I’m helping too – sometimes I can’t help but check my emails at night because I don’t want to leave people hanging on a response from me! It’s one of the reasons why I think I’ve been with the Science Park as long as I have.

Since I started all those years ago, my role has changed quite a bit, but I’ve always loved working here. If I was a stick of rock – you could cut me in half and it would probably say ‘Science Park’!

I actually live in the house I was born in – I’ve lived in Tile Hill all my life and I’m Coventry through and through.

I currently live with my husband and my 20-year-old grandson.

I enjoy walking my bulldog Tilly – although sometimes she acts like she’s 80 years old on her walks as she is so slow!

I also enjoy going out with friends and spending time with my family, especially my two grandchildren.