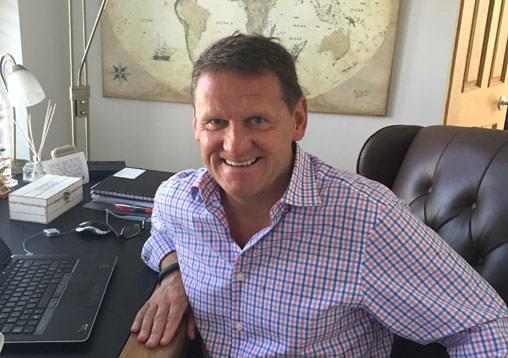 Nigel Shanahan was sitting in a dismal, depressing service station getting ready to complete a management buy-out of the company he’d established in the early noughties when the idea for his next business hit him.

Nigel and his colleague, Ian Seager, left IBM in 2000 and set-up Wire-e at the University of Warwick Science Park’s Business Innovation Centre in Binley, after being one of the first participants in the Science Park’s TeamStart programme.

TeamStart was an innovative business creation and development programme run by the Science Park in conjunction with Warwick Business School where the focus was on creating and supporting entrepreneurs from executives of mid to large companies.

The premise behind Wire-e was to harness the power of the fledgling mobile phone phenomenon and give big businesses the chance to communicate directly with their customers through SMS.

The firm would later become known as Rapide – also the name of the technology they were using – and the company struck up a partnership with Vodafone, who were blown away by the system.

Nigel said: “Things that we take for granted now were causing real waves back then. We were in a meeting at Vodafone showing them how they could send a text message to everyone in the room via a PC and they were really excited by it.

“They were calling people in from other meetings to show them what we were doing and could really see the potential for it.

“At that time, all they were doing from a business to business point of view was selling companies mobile phone minutes but wanted to add value. Our product was the sex and the sizzle that they took to companies such as Barclays or Merrill Lynch.”

A long-term, global partnership with Vodafone was seemingly on the cards, but after success with the UK operation, dealing with the mobile giant’s overseas divisions proved difficult and Nigel wanted to rediscover the entrepreneurial spirit that saw him launch the business in the first place. He wanted out.

The venture capitalists who’d backed Rapide became nervous at the thought of disassociating the business from Vodafone so Nigel instigated a management buy-out in 2008.

He sat at a coffee-stained table in a service station preparing for a meeting and wished there was a way he could let off steam about the surroundings.

“It just hit me,” he said. “I wanted to rant about the place and I thought that the next phase of the business was to not only be able to send messages out to customers but also to gain feedback. As a consumer I very often want to vent my displeasure about something and I do also like to say when I’ve had good service.

“I thought of the name Rant and Rave, I rang my wife straight away and I registered the URL that night!

“I originally thought it would be a different business but saw that, once the MBO happened, that the two would fit together so two years ago we rebranded as Rant and Rave.

“It was quite a leap of faith when we set up the business originally but I could just see the power that the mobile phone was going to have and, even with all of the other features it now has, SMS is still growing as business tool.

“The system is now more sophisticated and we can track in real-time the emotions and behaviours of our clients’ customers.”

In every guise, the company has always been closely associated with the University of Warwick Science Park. When it moved out of Binley, it moved to the main site in Westwood Heath and now owns a building on the site, employing more than 70 people.

The firm has taken part in technical research programmes with Warwick Manufacturing Group and the university has proved a happy hunting ground for talent.

“We work for half of the FTSE 500,” said Nigel. “You name them and there is every chance we are working for them!”