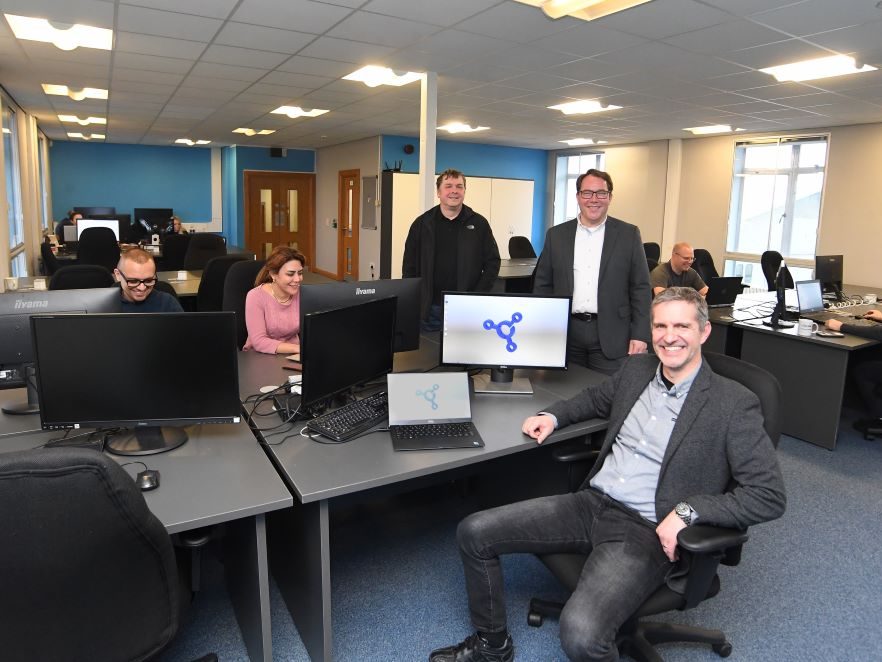 Lyra Electronics is a designer and manufacturer of highly efficient power electronics used by a wide variety of sectors.

Power electronics – such as chargers, converters and inverters – are used to transfer electricity from a source such as a battery, to a working part such as a motor. The efficiency of this power transfer can be crucial for many sectors in industries such as automotive, energy, aerospace, and much more.

The firm was founded by Pete James and Mike Evans in 2011, who worked together at Banbury- based Prodrive for a number of years.

They saw a gap in the market for power electronics that were more portable and could operate at a wide range of temperatures – many clients moving into electric power at that time, such as the automotive industry, were in great need of innovative power electronics to make their products more efficient, reliable, and affordable.

The firm grew steadily since it moved to the Venture Centre at the University of Warwick Science Park in 2012 and enrolled onto UWSP’s Ignite business support programme.

In the last couple of years, Lyra Electronics has seen rapid growth, increasing its turnover almost three-fold and going from 12 employees to 37.

It has now moved into a new office at its current site on the University of Warwick’s Wellesbourne campus, which will allow Lyra to separate its design work from its manufacturing work.

With Pete and Mike’s background in engineering, they had a great deal of expertise in how to create efficient power electronics which their clients were in great need of.

However, the pair did not have a great deal of knowledge in how to run a business.

When Lyra moved into Ignite offices at the Venture Centre, the company received initial advice from the Ignite team and had someone available to listen to their questions and concerns at the start of the business’s life.

Steady growth followed, which led to a move out of the Venture Centre and into UWSP’s site at Blythe Valley in Solihull.

Being at the Venture centre and later the Blythe Valley Innovation Centre also meant Lyra was surrounded by similar businesses working for or within the industries it was supplying to, which enabled them to swap ideas and learn best practice.

Pete said: “The events provided to us by Business Ready were really useful. Our background is in engineering, not business, so we needed a little bit of extra help around the finance and planning side of things to help Lyra grow.

“Having the Science Park on hand to speak to was important in the early days. Their advice set us up well for the success that was to come later.”

Move to Wellesbourne and further success

After further growth, Lyra took on bigger offices at the University of Warwick’s Wellesbourne campus, and was able to secure bigger projects during its time there.

Before moving, the firm had won a contract with Bladon Jets to design two types of power supplies for a gas-turbine generator, which served it well during its early days at Wellesbourne.

Further contracts in the aerospace industry – which involved the creation and manufacture of a motor drive and converter for very-high altitude aircraft – and for battery manufacturers saw the company grow to 10 employees.

In 2019, more contracts followed, and in 2020, Lyra hired Matthew Taylor – another former Prodrive employee – as its Chief Operating Officer.

Demand from a variety of industries for efficient power electronics grew rapidly at this point, and Lyra had established a strong foothold in the market thanks to the groundwork of Pete and Mike and the support they received from the Science Park.

This meant Lyra secured many lucrative contracts with clients in the UK and all over the world. By 2021, turnover had almost trebled since 2019, and Lyra had more than 30 employees on its books.

Matthew said: “Pete and Mike had secured so many great contracts, and it was clear the business needed to grow. I had known Pete for a long time during my Prodrive days, so I was delighted to join Lyra as its Chief Operating Officer.

“Pete and Mike had positioned Lyra so effectively in its early days – they were definitely ahead of the curve. This enabled us to acquire some great contracts as various industries realised how much they needed efficient power electronics.

“This has seen the company grow faster than ever before, and we’re in a very strong position as we head into 2022.

“It’s an exciting time for us – we have 12 to 13 projects on the go at the moment thanks to strong demand from the industries we work with and our recent successes.

“We’re currently working with the likes of JLR, BMW, the Advanced Propulsion Centre, and even a project to convert all ambulances into zero-emission electric vehicles.”

As Lyra experienced this rapid growth, it became clear that its single office at Wellebsourne was not going to be big enough to facilitate any further expansion.

It also saw its design team and manufacturing team work on top of each other, which was not the best way of working for the company.

The University of Warwick Science Park helped Lyra find a new building on the campus just a stone’s throw from its current office which was available.

Lyra will be basing its design team in the new office so the two sections of the business can work separately, making both much more focused and efficient.

Pete said: “Our engineers needed more space to separate their design work from their manufacturing work. Everything was done in our one office and it was becoming very cramped after our rapid growth.

“The University of Warwick Science Park was able to secure us a new office, which means we can spread out our work and make our designing and manufacturing processes more efficient.

“This will be crucial as demand for efficient power electronics is only going to increase in the future, so we need to be in the best possible position to take advantage of this.

“We’re very excited to have the design office ready for us, and we are confident 2022 will be one of our best years yet.”