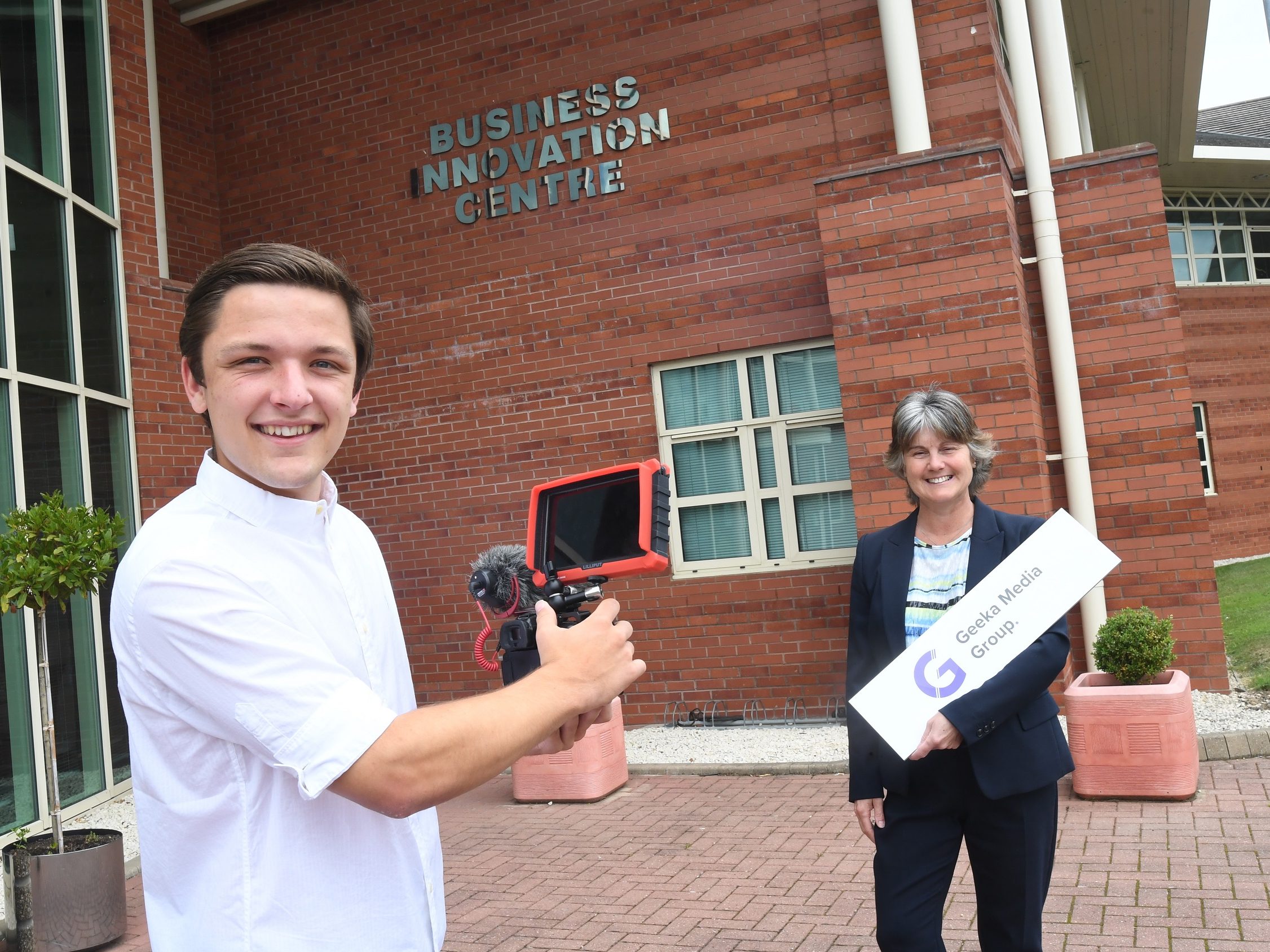 A teenage entrepreneur in Coventry, who was turning over £12,000 when he was in Year 9 at school, has moved into his first office and is preparing to take on his first member of staff.

James Cousins, now 19, began his YouTube channel when he was a 12-year-old schoolboy at Caludon Castle and, as interest grew in his channel, he set up a business bank account to help monetise his content.

His focus on tech helped him stand out from the crowd and now his company – Geeka Media – has carved out a niche in creating online videos and social media content for a range of corporate clients such as Intel, Samsung and ASUS.

The company has now moved into the University of Warwick Science Park’s Business Innovation Centre in Binley and James is preparing to take on another staff member when social distancing measures are eased.

He’s been tapping into advice from the University of Warwick Science Park’s Business Ready team to help the transition from being a one-person business to something bigger, with plans to employ the company’s first staff member. Business Ready has started to help James put together a growth plan to support his ambitions for expansion.

James said: “When I was around 12, most of my friends had YouTube channels but mine just took off. It was focused very much on tech and I started to grow an audience.

“And when it brought in £12,000 when I was in Year 9, we decided it was time to set up a business account. I think my parents thought I was going to start paying for the family holidays!

“I think there was a little bit of concern that I was spending too much time on YouTube but I worked hard at school too and got good GCSEs and A-Levels.

“Once some of the teachers saw the kind of potential in the business, a lot of them encouraged me to stick at it because they could see it was something I really believed in.

“Now, I am at the point where I have an office and I’m ready to employ somebody, which is something I’ve always dreamed of.

“I signed the lease here at the Business Innovation Centre just before lockdown and because my parents have been working from home, I’ve been coming into the office because I’m here on my own.

“I must be the only person who stopped working from home and started working in an office in the past three months!

“I really like the surroundings because it’s got a professional feel and the team at the Science Park are great too. There’s also lots of support on offer, which is helpful because I have no experience in so many aspects of business.

“We’ve kitted out the office with a studio and it’s the perfect place for us to produce the kind of content our clients are looking for. We’re working with some great businesses already and we’ve got some exciting work in the pipeline too.

“Once social distancing measures are lifted, I’ll definitely be ready to take on our first employee.”

Penny Robb, the centre manager at the University of Warwick Science Park’s Business Innovation Centre, said: “We are delighted to welcome Geeka Media to the centre. It’s been a very tough time for businesses so it’s great to have such as positive story about a young entrepreneur in Coventry.

“It’s a great base for the company and the Science Park team will be ready to offer a range of support to help James realise his ambitions for the business.”

Dirk Schaefer, Business Growth Adviser from University of Warwick Science Park, said: “In spite of his young age, James never fails to impress me. Since he started his venture at the age of 12 he continuously grew it and it keeps growing today. There are probably not many Year 9 students that can say they had a venture that was turning over £12k but James is very bright and eager to learn. I am sure he will continue to exceed his own growth expectations and we are delighted to support him.”